In the Matter of Ken Agyepong’s Breach of Privilege, Order 164 (4) Emerges as a Big Problem

On Tuesday 3 July, 2018, the 31-member Privileges Committee had its first public hearing to interrogate contemptuous allegations brought against the contemnor, Hon. Ken Ohene Agyapong (MP, Assin Central) by Hon. Mohammed Muntaka Mubarak (MP, Asawase and Minority Chief Whip). The lead counsel of the contemnor, Hon. Afenyo-Markin (MP, Effutu), after several futile attempts to prevent the committee from sitting, performed a last-minute stunt, showing the committee chair Hon.Joseph Osei Owusu (MP, Bekwai) a letter suggesting that some three members of the committee want to stand aside from the interrogation process. This forced the committee’s hearing to end.

(4) A member of the Committee may disqualify himself from participating in any investigation of the conduct of a Member, Officer or employee of the House upon a declaration in writing that he cannot render an impartial and unbiased decision in the case in which he seeks to disqualify himself. If the Committee approves and accepts such disqualification, the Chairman shall so notify the Speaker who shall request the Leader of the same political party as the disqualifying member to designate a member from his party to act as a Member of the Committee in any proceedings relating to such investigation.

Now let us avert our minds to the format and content of the letter that was brought before the committee; and some possible inherent flaws in Order 164(4):

1.   The letter submitted to the Privileges Committee was undated. For any letter to be considered professional, worthy of admission into a serious entity, in this case Parliament, it must have a date. It is very interesting that the Chairman of the committee accepted this letter that lacked a basic component of standard letter writing;

2.   Also, the three MPs claimed, in the letter, that they are unable to discharge their duties without bias because the contemnor is the Caucus Chairman for Central region and all of them have a close relationship with him. This is very frivolous, to say the least. Then all MPs might as well recuse themselves from participating in plenary activities as all of them are direct and indirect stakeholders of public policy and legislative issues they deliberate on. That is, as an example, if an MP is involved in imports and exports, then he or she considering his or her natural bias, should be exempted from all import-export policy related issues. By a similar reason, all MPs from the same political party may recuse themselves in cases involving their colleagues. This is certainly impractical and should not be considered, and should not have resulted in the adjournment of the hearing in the first place. Chapter 1(1) of the 1992 Constitution of Ghana is supreme and above the personal feelings of accord and high regard MPs have for each other. It states:

The Sovereignty of Ghana resides in the people of Ghana in whose name and for whose welfare the powers of government are to be exercised in the manner and within the limits laid down in this constitution.

Standing Order 164(4) is too broad and presents an opening for political mischief. To prevent subsequent abuse, it requires operational specificity to enable Committee Chairs make an objective assessment of what warrants self-disqualification from proceedings and what does not. 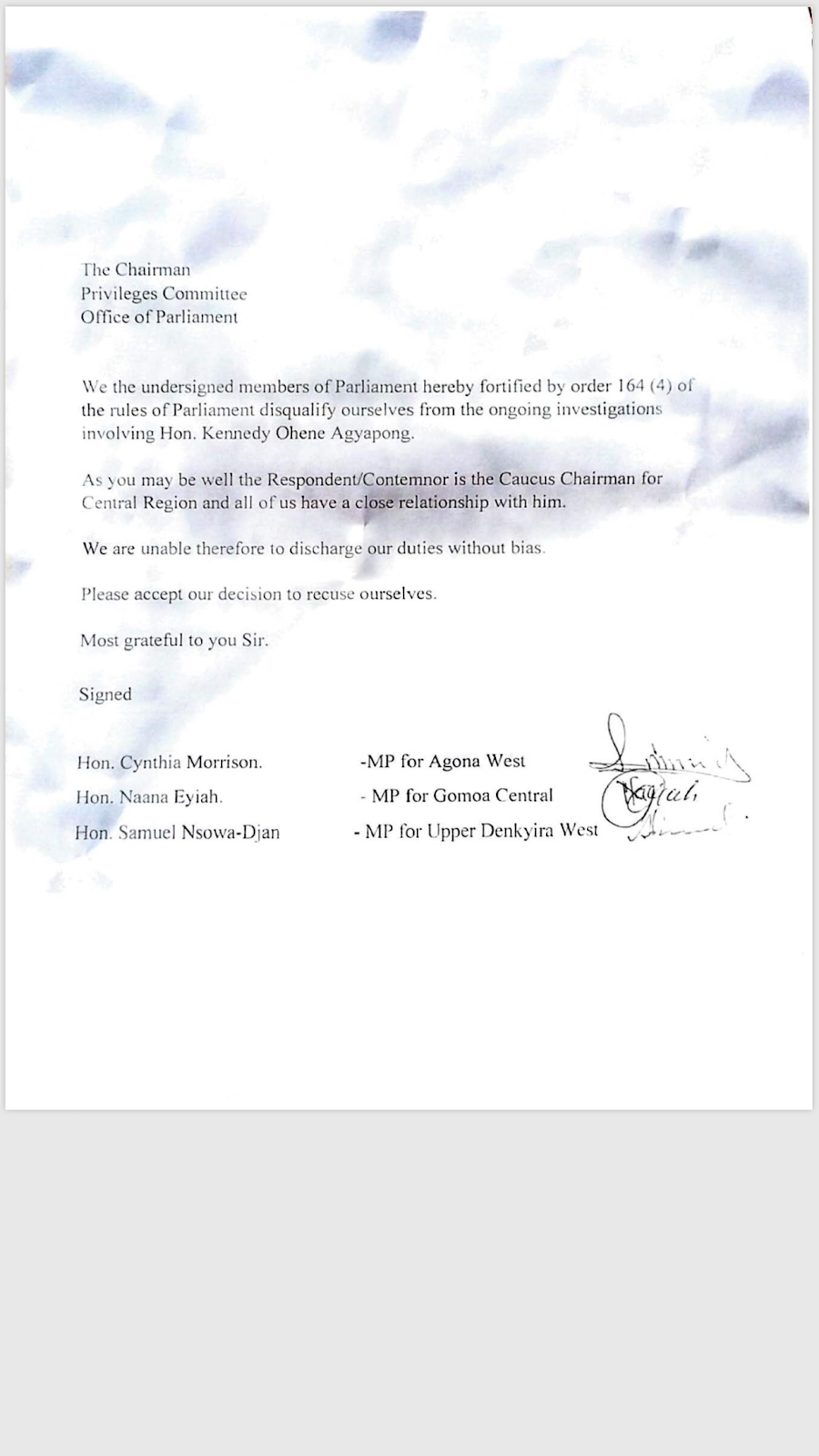