Ghana’s Members of Parliament and How They Use Twitter

Recently, Odekro published a report titled “Ghana’s Most Active Legislators on Social Media”. Included in the report was the kind of content MPs shared on these platforms and the Top 10 MPs with the highest number of Facebook + Twitter followers. MPs are usually grouped along political lines. However, what if we grouped Ghana’s MPs according to their Twitter usage? That is their number of likes, tweets, followers and follows. It serves as another way for us to know our representatives in Parliament better.

In this article, I share with you my findings after using a method called hierarchical clustering. Clustering allows us to group MPs who share similarities in a lot of their Twitter usage, and not along Political Lines. To be included in this article, the MP has to be in the Top 10 of Odekros report. That way, we are sure of at least some presence on Twitter.

They were grouped based on a few different factors:

And this is our MPs grouped: 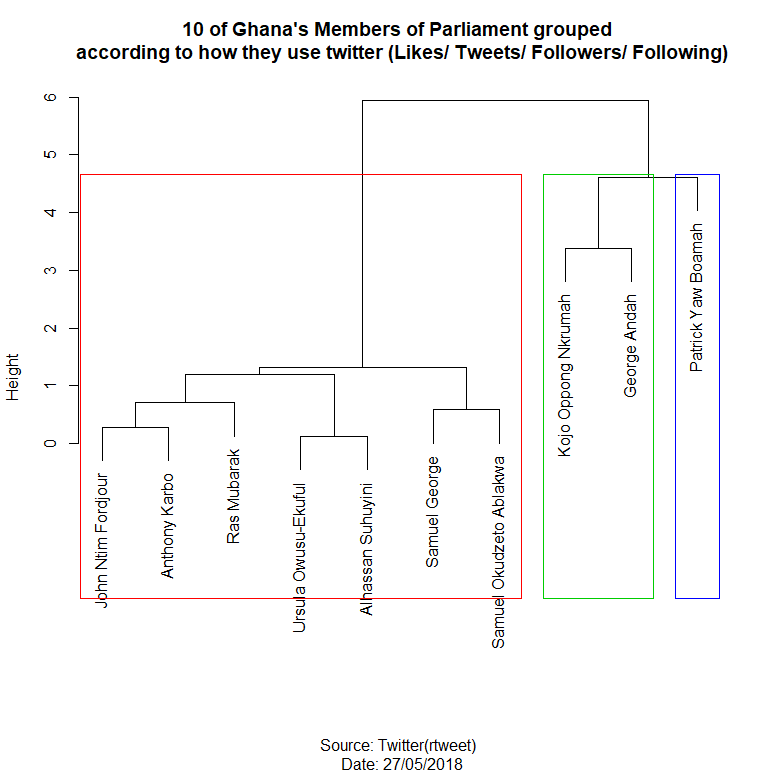 Let’s start with the red group.

George Andah, MP for Awutu Senya West and Kojo Oppong Nkrumah, MP for Ofoase-Ayirebi share more similarities than otherwise. They both update their timelines with tweets roughly once per day on average and barely favourite tweets each day. However, Kojo Oppong Nkrumah gains 107 new-followers on average each day, the highest among all 10 MPs. This can partly be attributed to a first mover advantage as he’s one of the few MPs to have been on the platform the longest; since 2009.

Patrick Yaw Boamah, MP for Okaikwei Central stands out. He is in a group of his own. He favourites tweets 2 times per day on average and updates his timeline with tweets 3 times per day on average. This is the highest of both measures among all MPs included in this article. He also gains roughly 8 followers per day on average whiles being one of the newest MPs in the Top 10 to join Twitter in early 2016. To me, it looks like he created his Twitter account to really engage, relative to his colleagues. If you are in the media and are curious to interview an MP about how they leverage Twitter, I think the MP for Okaikwei Central will be a good place to start.

Though this group of MPs may be considered active due to their large number of followers on Twitter, a majority of them rarely take actions with their accounts to warrant the tag of being “active” if we factor in how long they’ve been on the platform. However, the fact that they are not taking public actions should not be confused with inactivity. This is because they may just be reading their timeline, just like how you may read this piece without commenting.

All Twitter Data used in this article was as at 27th May, 2018. All code and figures used in the analysis can be found here.

David Quartey is a self-taught R programmer who looks for creative ways to make data accessible and interesting. You can find more of his work on his blog at https://medium.com/@DaveQuartey . Follow him on Twitter @DaveQuartey